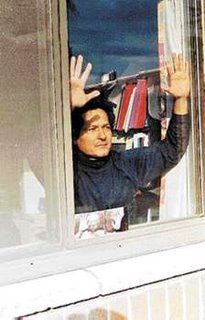 In the comments to the post below, A.D. inspired me with a superb poem by Ernesto Cardenal. Also an apt quote of William Carlos Williams; thanks A.D. Obviously all that chatter on whether poetry matters is silenced by poems like these...

Francisco Santos, by the way, has a powerful take on the subject with this poem, an elegy for Leonel Rugama, a very talented young poet who died at the hands of Somoza's Guardia Nacional at the age of 20. Be sure to read the translation of Leonel's poem below in the same post.

The editing of Undressing the Night is almost done; the definitive edition will be off the press ... well, we hope, soon (although it may take a month or two more before I receive it). Some of the introduction had to be rewritten because we failed to mention Ernesto Cardenal. Cardenal had been one of Francisco Santos' poetic mentors. For several months in 1969, Francisco and his brother Mario (also a poet as well as short story writer) stayed in his artistic community in the Solintename archipelago of Lake Nicaragua. (They must have been among the first to stay there, since internet sources I've come across tell me that Cardinal started his community around 1970 or so...) For Francisco, it was a very productive time -- besides getting his first book manuscript together with editorial feedback from Cardenal, he read voraciously whatever poetry in translation he could get his hands on, particularly 20th Century American poetry (Eliot, Pound, the Beats), much of which had been recently translated by Cardenal and another Nicaraguan poet, Jose Coronel Urtecho (mentioned in Francisco's poem hyperlinked above). Apparently EC was quite taken aback when Francisco showed him our first draft of the book and the intro failed to mentioned him, although it described quite extensively Pablo Antonio Cuadra's shaping influence on Francisco. Oh well. I'm glad we can rectify it before it goes to print...
Posted by Brian Campbell at 12:52 am

a friend of mine (not a poetry friend) is currently in managua and told me that several of her coworkers have had the occasion to meet e.c. after i mentioned in passing that i had been translating some of his poetry. i think this is interesting in that they (her coworkers) aren't literary types and probably didn't know who he was prior to their time in nica.

it's inconceivable to me, for example, that some one outside of the poetry world would happen upon a john ashbery or the like while in the u.s. and have it be any sort of notable experience. poets like e.c. seem deservedly to be so much more of cultural figures than those here in the states.

to return to your multi-part discussion then, perhaps us norteamericanos are right to look to los centroamericanos in searching for ways in which poetry can "matter".

I appreciate your comments. This might provoke yet another post. Something about the sociologocial realities (as I see them, a by definition very limited perspective) of poetry down there. I'm cooking the post in my mind. How's that for mixed metaphor? (Half-baked, that you can say...)