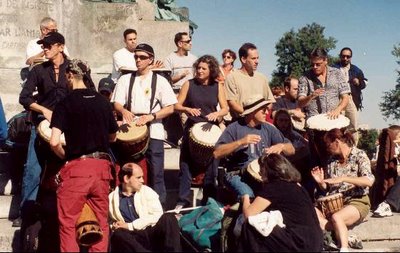 Back in the late '70's a certain Sengalese master drummer started holding drum workshops on Sunday afternoons in the park around the Georges Etiennes Cartier monument at the foot of Mont-Royal, the mountain from which the city of Montreal derives its

name. Aside from the pleasure of playing outside in a beautiful green space in summer, the advantage was that this was one place he and his students could pound the skins without bothering neighbours. Soon they attracted spectators, among them youthful free spirits who danced to their accomplished syncopations. Later more spectators came, more dancers. Eventually there were hundreds, then thousands gathered around the monument on the hill. A mini-economy developed around them: people hauled up coolers to sell beers and soft drinks bought at the nearest depanneurs (corner stores); others spread blankets to sell hand-crafted jewellry, candles, hash pipes, carvings, used clothing, and yes, more tam tams. 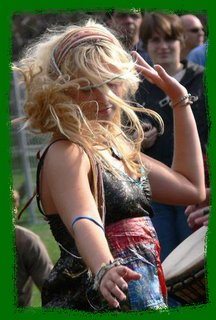 Back about fifteen years ago when I first went the Mont Royal Tam Tam was a world unto itself -- spontaneous, raw, unregulated, magical -- a kind of Andean/Californian/African market populated by ex- and neo-hippies, a lot of them high, if not on life itself, on other soft substitutes. (And the tam-tams, as many as fifty players at once, were DEAFENING.) It seems, for an amazingly long time (one more example, some would say, of Montreal laissez-vivre) authorities looked the other way. But finally the day came when police cracked down on drug use and unlicensed beer-selling, and complaints about the messes left on the side of the hill lead to other civilizing effects -- rows of outdoor toilets, garbage baskets, constant police patrol -- so that now these Sunday afternoon celebrations seem much tamer, more like, well... a well-organized folk festival.

Anyway, after going back about three years ago and sidling among the crowds, I wrote this poem. I think I was more affected by the memories of former times than the present circumstance, which served only to stir them. After the poem was turned down without comment (as is usual, of course) by eight reviews, I answered a call for submissions in the QWF newsletter from Carve Zine, a local zine devoted to publishing Montreal writers. I assumed that at least they would appreciate what I was writing about. And sure enough, a mere 23 hours after emailing the submission in, I got this letter, perhaps the fastest acceptance on record, certainly for me:

...I'd love to include Carnivale in the Spring issue of Carve: it's so invigorating and hypnotic -- a very springish lure. I can pay through comp. copies, and plan to print in mid/late May....

to this mountain in the sky
to bend, blend to the thrum
to the thrash & thrap of drums
limbs flaring, flying
a blur of tan & green
swaying in motley unison
to the crack & clap of drums
while around them sellers gather
to spread their coppery wares
menorahs, nose rings, phials,
anklets, opals, viols
while onlookers on the grass
suckling flutes of glass
strum their wooden women
dream wings into skies
rise, weave, whirl
to the tam tam tom of drums
rise, weave, whirl

vents of distant dimensions
chasms in the sky 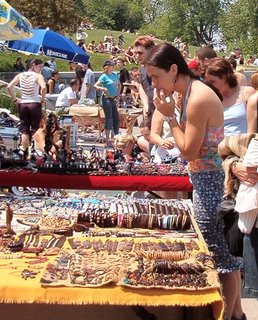 Carve Zine is a hand-stitched affair on high-quality vellum. To get a copy send $7 by cheque (made out to Andrea Belcham) or cash, to 96 Parkdale Ave., Pointe Claire, Quebec, H9R 3Y7. E-mail: carvezine@gmail.com


Some Montreal Tam-Tam sites:
For a video of the Tam-Tam (and this one gives you a better idea of the full extent of it at a peak moment), see here.

For a site with photos and links (from which three of these photos are taken) see here.

For a more detailed history including how the Tam-Tam got started, see here.

Email ThisBlogThis!Share to TwitterShare to FacebookShare to Pinterest
Labels: BC Poems, Montreal

Congrats on the new gig!