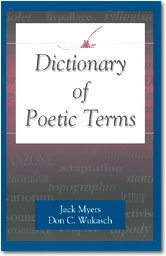 During the last few weeks I've been reading -- on an almost daily basis -- the Dictionary of Poetic Terms by Jack Myers and Don. C. Wukash, which I ordered direct from U. of North Texas Press back in September. I'm really enjoying it, and yes, I've decided to read it straight through from A to Z, with little side trips up into higher ranges of the alphabet to follow up cross-references that pique my curiosity. Right now I'm in the middle of letter C. I suppose at the rate I'm going I'll be finished by mid-March. Then I will know everything there is to know about poetry, and stop writing then and there. (Right?)

The entries are well-written and as broad in scope as you can imagine -- on history, poetics, devices, etc. featuring citations from the ancients to contemporary poets quite young. At times whole poems are cited, most of them superb and a number by poets I've never had the pleasure to read before. Included are excellent mini-essays on things like Fractured Narrative, Free Verse, Clichés, Cinematic Techniques (this would interest Charles), Juxtaposition, Meter, etc.

Here is a useful entry I found under the letter A:

anticipatory line ending (see LINE ENDING), a type of ENJAMBMENT in which the information is purposely delayed in order to heighten the reader's expectations. The a.l.e. can be formed by any part of speech when a sentence, phrase, or syntactical unit is cut off from completion. "He went into/the store of/his/desires." The device can be overused, become annoying, or appear illogical if it occurs too soon or too consistently in a poem.

Funny, it was the effective use of a.l.e. that I was admiring in a review of Barbara Pelman's poetry a little over a year ago, but in a rather round-about way, because I was frankly unaware that a term had been coined for the device. I wonder though how many other poets and even academics are unaware of that term? (The review ended up being published -- in refined form -- in the Pacific Rim Review of Books, so obviously it didn't suffer too much from my ignorance.)

A, by the way, was heavy going at times. with all kinds of arcane -- and highly forgettable -- rhetorical and otherwise technical terms to wade through: antimetabole, antiphrasis, antirhesis, antisagoge, autonomasia, aphaeresis, apocarteresis, apomnemonysis, apophasis, etc. (Enough to give one apoplexy, in other words.) What it did prove to me is that whatever attitude or emotion a poet may express, the rhetoricians have identified and found some label for it, a ready tool to brand, delimit, and dissect.

All this to a practitioner of the art can be rather disconcerting.

I'm told that the experts of Japanese martial arts over the centuries compiled terms for more than 60 different kinds of kicks below the knee. Of what use could all that knowlege have been to a working samouri warrior? Ultimately, like oriental kicking terms, the rhetorical terms are, as I said, highly forgettable, best looked at and for the most part forgotten. Of what use were they to the likes of Shakespeare, Shelley, Plath, and Thomas, who without knowing them provided the most shining examples?
Posted by Brian Campbell at 12:25 am

Wow. You mean I'm not the only litnerd that does this? I'm reading through Holman and Harmon's _A_Handbook_To_Literature_ myself. Thanks for validating my existence.

I have Holman's, too (mind you, a yellowing 1972 edition), and believe me, for a poet this one is much more to the point. Sorry to invalidate your existence, but I'd never be motivated to read thru Holman. Like, BORING. ;) !!