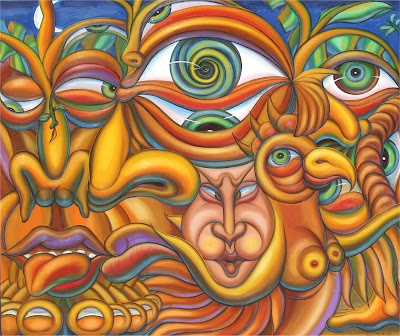 A week or two ago a friend and I wandered past a collective gallery on Parc Ave. -- Ame Arte, it is called -- that generally displays local artists of varying quality -- and were surprised to find a show there worthy of a major museum. It turned out to be paintings of one Iran Plata, a Cuban who just immigrated recently to Montreal... and who happened to be there at the gallery at the time. A former art professor in Havana, I don't know how he got out -- when I vacationed in Cuba almost 20 years ago, people couldn't, and have things changed that much? -- but he seems to be here to stay. His canvases, mostly quite large, are at once grotesque, disturbing, playful and warm. It's easy to pick out influences -- Aztec and Inca art, Diego Rivera murals, Escher and de Chirocco perspectives, Pop Art psychedelics, Salvador Dali dreamscapes (he has a number of figures with ants crawling over them, clearly a salute to Dali). But he has blended these into his own bold style, and the painterly skill is extraordinary. He tells me that his palette, typically a riot of tropical colours, has already become toned down somewhat by the Canadian winter. I wondered if the austere canvas below was an expression of that. He answered, no, this one was also painted in Cuba, but inspired by a younger friend who had confessed to him that he had spent most of his adolescence alone in his room. Anyway, you can see more of his work -- including some striking quasi-landscapes -- on his website. 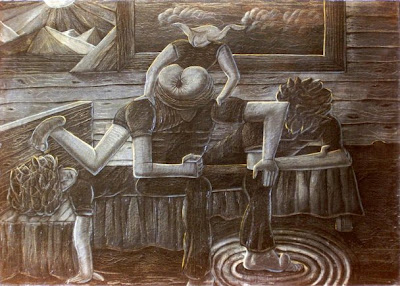 Iran Plata: "Adolescente"
Posted by Brian Campbell at 1:26 am