Layin' my balls on the line 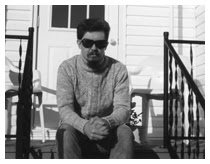 Lately I've been having a riproaring squawkbox discussion with a certain poet and evident firebrand named R.W. Watkins. (The bio says he's in Newfoundland, but my site meter indicates he's writing somewhere from somewhere way up near Churchill, Manitoba.) The occasion was my post commemorating the passing of Artie Gold, a remarkable Montreal poet who I did not have the fortune of knowing or reading during his lifetime. Someone in the comments asked for the cause of death, and when I found a Montreal Gazette obituary praising him as "one of Canada's finest poets" but also stating the cause of death, I posted it simply to answer that question.

This was the flamewar blast I received:

Oh great! Isn't that typical! Even those mediocre assholes who run things at the League of Canadian Poets are suddenly calling Artie Gold "one of Canada's finest poets" now that he's dead!

Twenty years ago, he was just another 'government-funded joke'--someone whose books wound up in our high school library because they were--in the words of one of our teachers--"commie-homo junk that the tax-wasting Canada Council couldn't sell". Just a year ago, I did a search of the internet to discover that he was just another lost name from Canada's poetic past--even folk who once wrote and published with him no longer knew where he was or even if he was still alive.

Poor ol' Artie. I'll never forget his satirization of comic book and cartoon characters in 'private eye', from 'before Romantic Words' (1979); that's one of my all-time favourite humourous pieces by any poet. Ripping off and reading his work from our high school library, I can unmistakenly dub him an early influence on the work of Kent Burt and myself.

The moronic, hypocritical and expedient editors and LCP dictators (who probably never even heard of him--let alone read him--prior to his passing) who now praise him posthumously should have his longest poems forcibly tattooed on their genitalia while driving through mountain country on a gravel road.

Ow! My response is as follows:

You make my balls hurt with your invective. I'm actually (as of the last few months) the Quebec representative on the LCP national council. I don't know if you're aware of that. I don't make a great to-do of it (i.e. it's not in my bio) because that, in itself, is no great achievement (indeed, could well be taken as the opposite).

Mediocrity abounds everywhere...but so it does among the LCP's detractors. For my nuanced views on the worth and absurdity of the League, check out my post of June 23, 2005.

I just cut and pasted that bit from the Montreal Gazette to to answer Lunamoth's question. I don't know who wrote it. I make it plain that I didn't know AG myself, but then I was disconnected from any sort of "poetry scene" myself for a good ten or twelve years. A few days after this post I found an AG poem I very much liked, and posted it, for the betterment of the world. Read with your eyes, man.

If AG was "government funded" (joke or not), if he was published by Vehicule, it could be that the LCP had something to do with it. If I let you use my blog as your ranting platform, it's because your 3rd paragraph is both an impassioned testiment of his worth and contains some valuable info. But spare us the venom. It doesn't do anybody any good.

"Spare the venom"...? Oh, Brian, Brian, Brian...THAT is one of the biggest problems inherent in Canadian poetry (and the arts in general) today: too much incest and not enough venom. No healthy arguing or the occasional drunken bar brawl means no competition, and no competition means the same old boring junk, year after year after year after year. It's so typical of an over-mannered country like Canada--so Marxist and extreme in all the wrong areas. Oh, how I miss Mordecai Richler--our last major author who could compete in every way with the American writers who came out of the '40s and '50s! The fact that poets now have to give readings in smokefree pubs and coffee shops tells me everything I need to know about the Canadian approach to the arts: In a state where health and longevity take priority over Dionysian self-sacrifice, one must come to expect that seminal work of any great value and integrity will be rather short in supply.

As for the LCP and the Canada Council, I used to be an associate member of the former, and I received funding for a solo volume of ghazals I wrote back in '99-'01 from the latter. I soon abandoned the former once I realised that it served very little real purpose, other than as a self-congratulatory institution--a fine place where (mostly) third- and fourth-rate poets can take solace in each other's mediocrity (things haven't changed much since F.R. Scott mocked such collectives back in the '40s and '50s). As well, I was disturbed by the fact that LCP members were always smiling in newsletter photographs--as if life was indeed good under Stalin/Tito/Mao, and their progress reports to the Canuckistani Council of Ministers--in the form of pointless, state-praising poems and accounts of Canada Council funds deployment--would state as much. The LCP also appeared to cater to free verse authors exclusively--I have a feeling that the majority of its members could not work in a closed form and compose a proper sestina or ghazal in a month of amphetamine-fueled Sundays, so lacking are they in true poetic talent. They seemed content to remain merely harmless, government-funded hacks--Bukowski and Atwood imitators who haven't a clue what Bukowski was all about, or how average Atwood was at her poetic zenith. When the first issue of my seminal Contemporary Ghazals journal was published a few years ago and promoted in the LCP's newletter, the fact that not one single member responded to its existence told me everything I needed to know about the 'lofty' visions of the LCP and the sad state of Canadian poetry in general. If it wasn't all so damned pathetic, it would be truly laughable. Thankfully, the more serious poets south of the border were more receptive, thereby making the project a worthwhile little venture after all.

As for the Canada Council--a good and worthwhile idea once upon a time--the problem lies with the manner in which projects are selected for grants, and the manner in which the selection committee is appointed in the first place (a process which, apparently, no one is willing to properly divulge). If authors/artists (once they had fulfilled eligibility criteria) were to have their names drawn at random, lottery style, for available grants, then I might have some faith in the system. As it stands now, it's just another case of "it's not what you know, but who you know". And, of course, there's always the matter of socioeconomicpolitico compromise: How can I be taken seriously as an independent and/or radical voice when I'm ultimately receiving funding from a federal government, with whose extreme-left and/or extreme-right ideals I may take issue? In regards to my own grant-awarded project, I decided to put the finished volume on the back burner indefinitely. The manuscript has never been sent out for consideration, even though many of the poems in it have been published in various places over the years. Someday, I might publish it myself.

To be blunt, Brian--and you know this as well as I do--the vast, vast majority of poetry (and increasingly other literary forms) being published by established houses and high-production magazines/journals in Canada today are the 'adult contemporary' or 'easy listening' of the verse world. In fact, I'm amazed at how books of all types being published here in Newfoundland have come to resemble nothing as much as tourist brochures--a lucrative investment, don't you think?--funding authors and publishers who will (unwittingly in many cases?) serve to combine/equate the arts and tourism industries. Very, very tricky. No Paris-in-the-'20s or NYC-in-the-'50s will be happening in Canada any time soon--one can rest assured of that. In fact, I have literally fallen asleep while reading many such books and journals from across Canada, and when it comes to my reviews (whether for the journals/zines I am directly involved with, or others from around North America), I rarely find myself covering poetry volumes that aren't either self published or published by small collectives these days. Frankly, whenever I see "published with the assistance of the Canada Council" on page 3, I start to cringe a little; my doubting mechanism is rarely (and sadly) proven invalid.

So that's my take on it, Brian. Thus lieth within the want--the need--for piths and venom.

One more thing: I'm trying to put together a little internet poetry project that kind of relates to some of the themes I've just dealt with above. If I can get enough people interested, and get it off the ground, your opinions might be valued. So watch this space....

Actually, my estimation of this fellow RW went up tenfold with this articulation of his views. My missive in response:

You provide a lot to respond to -- but this time, I agree almost completely with what you say. This is healthy dialogue.

My real objection to your previous "venomous" post is that you made my balls hurt, and unfairly I think.

Venom is good, if intelligently directed at the right targets. As this last missive demonstrates. (But I agree that is not always easy: sometimes an outburst is needed to clear the air, as seems to be the case here.)

I think this dialogue shouldn't be consigned to the comments section but should be posted and readily accessible on Google. Do you agree? But let me wait a few days. I like the look of my guitar up there; I don't want to push it down into netherland just yet.

P.S. The receiving of grants or publishing support from government or corporate foundations always presents a quandary: how hard (and when) to bite the hand that feeds you? It seems ridiculous to refuse any such support when it comes from a relatively reasonable body like the Canadian government... but one still has to reserve the right to denounce hypocrisy and injustice when the need arises. Keep me informed about your project.

The discussion continues, so if you want to read more, go here.
Posted by Brian Campbell at 11:52 pm