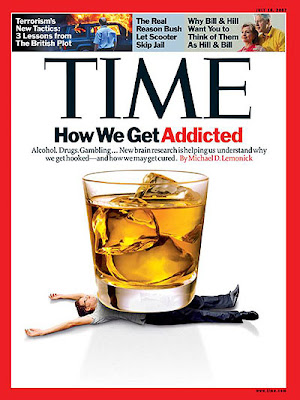 There's some lively discussion of this magazine cover further down in this blog. Seems it's rife with embedded subliminal imagery. Ah, those salacious ice cubes! RW has an article about it here.
Posted by Brian Campbell at 12:29 am

It seems TIME Magazine is on a roll again lately.

Check out the cover of the July 23rd edition ('How The Democrats Got Religion'). Am I losing my marbles, or has some genius joker gone and lightly embedded something reminiscent of the classic negative images of the Turin Shroud into the front of the Dems' trademark donkey? One can even make out Christ's folded arms in the upper legs of the animal where the hair colour changes! Also, there seems to be some wording embedded near the donkey's right ear: When one tips the magazine horizontally (so that the animal is closest to one's chest), what appears to be "WE ARE GOD" magically emerges beside the donkey's (fully visible) right eye. Now who says that TIME is biased towards the Democrats and the dogmatic left? Rupert Murdoch should be laughing....

Then there's the July 30th edition ('We Are What We Eat'), with another cover by our old pal Arthur Hochstein--the man who put the cocks in the rocks on the cover of the July 16th edition. This time Dear Arthur seems to have almost literally stolen a page from Wilson Bryan Key's The Clam Plate Orgy. His photo-illustration features a crate full of sexually writhing fish, meat, breads and vegetables. There are SEXes embedded all over the place, and a large phallic breadstick of some sort aims straight for the crotch of the spread-eagled letter 'M' in 'TIME' at the top of the cover. I think Dear Arthur realises we're on to him, and is now giving us the proverbial finger by seeing just how mischievous and archetypal he can be in his designs!

Actually, I think you should stop subscribing to TIME. I also suggest you check into a hospital to have your marbles checked. I can recommend one here in Montreal that is quite nice. It has clean facilities, pleasant doctors, and was once directed by one Dr. Donald Ewen Cameron, a truly excellent fellow, one of whose proteges might take you for a *psychic drive* in his own hallucinogenic automobile...

Joking aside, the Time Magazine cover website is not high-res enough to see the images on the donkey you describe.

I'll have to run to the store again (rather, the public library, since it's not the current issue.) Also the site shows a different cover for July 30th than the one you describe, one with the helicopter flying off with the "A" in Iraq. Someone of right-wing persuasion finds something suspicious about that one, and I quote (I'm sure you can google this):

The front page of this weeks Time mag features a nice bit of propaganda. It illustrates a story called ‘What will happen when we leave Iraq’ and has a silhouette of a helicopter carrying away the A in Iraq. The helicopter, however, is a Soviet Mil-24 Hind.

Looking at his link to the Soviet helicopter, I can't help but agree.

TIME flies when you're having fun. But back to SEX:

Again, SEX I think is something really good to embed. No bed is good without it, anyway; and sans sexe, we wouldn't be alive to *cover* this story (between covers, or on top). TIME is only promoting the propagation of the human race. What the FUCK could be wrong with that????!

... but what the character means by propaganda... hmmm, clearly Time is mind-fucking people of every stripe.