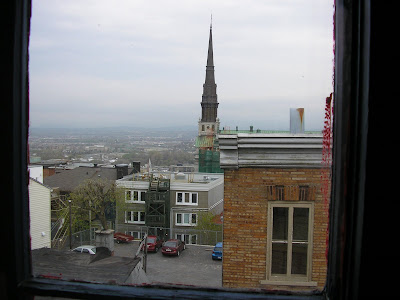 A prose poem of mine is up at Montreal Serai. (Ed. Note, August 2009: The poem doesn't seem to be up anymore -- and has since undergone changes. The final version, which appeared in Passanger Flight, is below.) This one is a palimpsest of Charles Baudelaire's "Windows" in "Paris Spleen" as translated by Louise Varèse (this transcription has a number of typos, but is the only one I could find). I wrote the first draft of it in Quebec City only last May. Above is a view from the hotel window by which I wrote the piece (click on the photo to see it much larger). Through that window directly across, one can actually see kitchen cupboards. I saw the penumbra of human shadows, a hand reaching up -- but not the whiskey bottles! Actually the night-time sparkles of the city are more spectacular from the left side of that window, looking through towards the right, where I sat with my laptop and drafted the poem -- but I didn't have the presence of mind to photograph that view. (For more photos from my camera of that trip, click here.)
CASEMENTS
(after Charles Baudelaire)

Through this doubled pane, the city spreads. Strings of lights delineate throughways. Pinpoints shunt the length of them. Constellations of fixed lights – an electronic Milky Way – wink in a haze of automobile fumes, steam rising from the river, dust filtering out through industrial chimneys.
Looking around my neighbourhood in these so-called wee hours, I see rectangles of variously shaded yellow or blue light suspended among the shadows. Across the street, framed in a silhouette of century-old moulding, I see under a single incandescent bulb a row of kitchen cabinets. Occasionally a hand reaches up, opens a cupboard, takes down a bottle of whiskey from several others on the shelf. The hand is gnarled, age-spotted – man or woman I cannot tell for sure. Several other rectangles glow with a bluish, spectral hue: I imagine other solitudes crouching over computer screens, sending digital self-portraits around the world.
Across the ocean of roofs, I see a middle-aged woman, her face already lined, who rarely if ever goes out. Often, as now, she slouches motionless in front of a television. I can only imagine her frown: out of that imaginary frown, out of practically nothing at all I have made up this woman’s story, or rather legend, and sometimes I tell it to myself and my eyes water; but I do not weep. Perhaps my compassion – could this be called compassion? – is anesthetized by her own ceaseless foray into distraction. Perhaps in one of these casements, someone is observing my square – dimly illuminated by this screen on which I write – and thinking: there is an oblivious one, a little life, unaware of all others! Yet imagining these lives, even the one observing mine – hasn’t it helped me to see my own, to feel that I am what I am – but one open eye among the many eyes of the city?
Posted by Brian Campbell at 4:12 pm

Email ThisBlogThis!Share to TwitterShare to FacebookShare to Pinterest
Labels: Baudelaire, BC news/events, BC Poems, Quebec City

Nice. You sound like you could have been describing panels from a '60s or early '70s Spider-Man comic!--especially Gil Kane's artwork circa 1971.

I haven't read much Baudelaire--I can't read French, and, well, translations can be rather suspect, as we all know. (Ever come across two translations of the same Chekov piece that even remotely resembled one another...?) Being a big-time Jodie Foster fan since the '70s, I'm rather intrigued by the fact that Foster is such a Baudelaire expert. Foster, as you probably know, speaks French fluently and has had a whole other life over in France and much of the rest of continental Europe--including a singing career and making the French chat show scene. I would love to read some of her literary criticism and university papers; sadly, none of this stuff has ever been published to the best of my knowledge. I bet she's written some killer French-language poetry over the years as well....

Thanks, Rob. Maybe I should put After Baudelaire and Certain Spider-Man Panels by Gil Kane.

Thanks also for the link: for some reason sound isn't working on my computer, but when I get it going again, I'll be sure to check it out.
(My hunch is that it's a loose wire, that could be repaired in seconds... but it's finding the wire among the tangle that puts me off...)