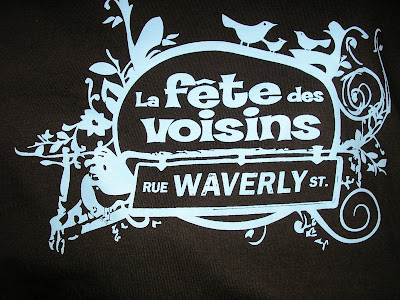 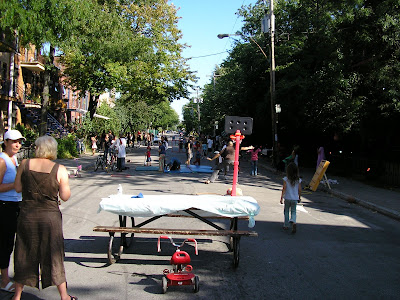 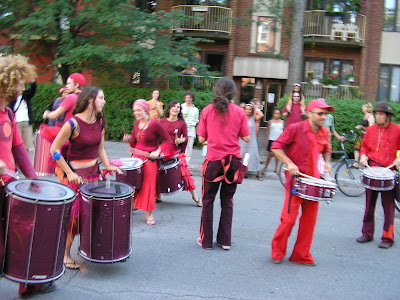 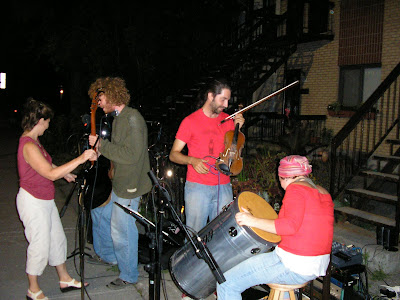 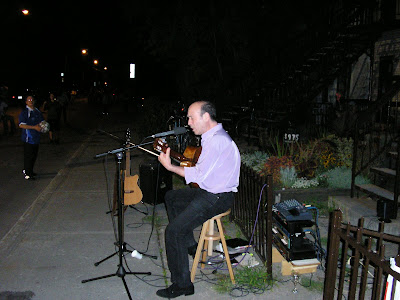 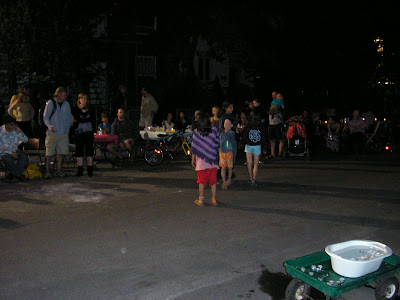 I have to say, I live on an amazing street: rue Waverly, in Montreal's Mile End area. So many artistic and rather cool people live here that a group of five of us formed a committee to have a community party to get to know each other better and to celebrate the cultural life of the street. ("Fête" in French is like "Fiesta" in Spanish... meaning party). It soon got quite impressive. Someone on the committee knew how to pull the right strings: we got the city to fence off the street, the local Y to provide tables. The city even gave us permission to provide our own alcoholic beverages. The afternoon began with a Children's Olympics and street theatre for the kids (second photo from the top -- click on it to see it big), a showing of paintings by artists on the street, a performance by a percussion/dance troupe called the Kumpa'nia band, whose leader lives on our street (third photo), followed by a pot luck supper and music. I donated my sound system; a guy who works in theatre provided lighting from a second floor balcony across the street. I performed some songs (A few pictures were taken during my set; maybe one will appear here eventually). Although a Cuban ensemble that was supposed to be the main feature failed to show up (they were on tour in Toronto and just couldn't make it on time), about a half-dozen quite skilled musicians ran into their apartments, returned with instruments and provided quite a varied evening's impromptu entertainment. In all, about a hundred people participated -- a truly huge turnout for the first time. Incidental costs were covered through sales of T-shirts with the insignia above, designed by one of our neighbours. In an age where "community" seems a thing of the past, where local warmth and camaraderie are ever-more unattainable due to so many anti-socializing factors including this internet you're on now, I think this is truly remarkable. I wonder, how many other neighbourhoods were throwing such a party for themselves this weekend?
Posted by Brian Campbell at 11:45 pm