Saw Robin Blaser and Phil Hall read at the Atwater Library last Friday night. (One can catch this reading, along with other Atwater readings, here.) Neither poets I knew particularly well, although from my bookcase I fished out Robin Blaser's Pell Mell, which a friend gave me at about the time it came out in 1988. Blaser, friend of Jack Spicer and Robert Duncan and intimately 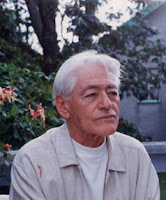 associated with what has come to be known as San Francisco Renaissance (even after he came to Vancouver and took Canadian citizenship in the early '70s), is now 83, and clearly, probabilities are I wouldn't have a chance to see him again. So I read through 50 pages of his book to get a sense of his style and see if he was worth going to hear read. I liked what I saw, although his work took a while to grow on me. Clearly, Blaser is an academic and rather abstruse at that, but he's not in the slightest bit stuffy. Free-wheeling, whimsical, ethereal ... emphasis on vision, evocation, delight in multiple possibilities, accidental juxtapositions that tend toward hermetic. A looseness of diction I associate with the West coast. Definitely a happy writer. Here's one brief poem I liked, although it is certainly more straightforward and "concrete" than most of what he does:

My Window
of neighbours and pumpkins
and sweeties, private kisses, sky
and wonderful, superstitions
to begin the day, knocking on
wood, rhythmically, musical
breakfasts, soft, boiled,
toasted with currents, intimate
wandering of questions and belief,
the thin skin wanders the adventure
of clothes-off-clothes-on, and
Mattress Mary, across Rock Creek,
out of bounds, summers

There's stuff here about which I wonder whether it belongs: "and Mattress Mary, across Rock Creek"? Could the poem do better without it? (By the way, there are no stanza breaks -- somehow the encoding included them, and I can't get rid of them.)

Many of Blaser's poetic clusterings are gathered under abstract titles: Belief, Anecdote, Romance, The Soul, Desire. Here's The Soul, another poem I enjoyed. Curious that it also features windows and summers.
This poem is particularly successful because it cleverly invokes an heraldic notion of "soul"-- flashing wings, borne aloft -- as locus of being, the "there-it-is", gliding artfully among the flotsam. (On Explorer I discover the stanza breaks -- every two lines or so, are lost: best to look at this post through Firefox.)

Pell Mell is a good title for a collection of such joyful skitterings among seeming (and frequently not-so-seeming) non-sequiturs. These have been amassed with all his other poems into a larger vision called "The Holy Forest", an impressive tome published just last year. (I wasn't convinced enough to shell out for it, but I might...) On stage Blazer was warm but humble presence, if at times too soft-spoken for that microphone. A couple of times a member of the audience served us all by asking to repeat a poem that was just barely audible the first time.

Phil Hall was a good poet to pair up with Blaser, because he is also cerebral and very quirky, but if anything intenser, darker, and given to offbeat and sometimes genuinely funny wordplay. Consider these lines he read from his newly published "White Porcupine" :

self-sufficiency is the worst crime
if what I have to say seems unconnected -- wider!
there is a further from lies than truth

the landscape is lined up around the block
to get in to see The Landscape: A Wire Circus

giving their harness-bells a shake
where has it gone she gone he gone?

no one humiliates the dead (yeah right)

Perhaps to the uninitiated these lines seem remote, but now I can't read them without remembering 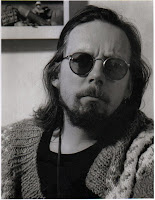 Hall's superb reading of them. Hall performed these lines so well -- with the edgiest of inflections and pregnant pauses -- that he had the audience quite cracking up, particularly at the word "wider!": he exclaimed it, jerking his hands apart to make it clear that was urging himself and the reader to be even more disconnected. This singular sense of "wider" is not that obvious on the page, where it could be taken as simply an additional and alternative adjective to "disconnected". (Even that exclamation point doesn't quite make the point.) I should add that Hall's high-pitched voice sharpens those points, and is pretty well perfect for what he has to deliver.

Both Blaser and Hall play with abstractions and arbitrary inclusion in a fashion that goes quite against the grain of what I was saying in the foregoing post on craft, which was, essentially, interrogate those loose ends ruthlessly, cut 'em out. Refreshing and even illuminating that these poets also succeed, in their ways, so well.
Posted by Brian Campbell at 2:39 pm

'My Window' reeks of Ferlinghetti, and maybe even Corso.

Not bad people to reek of.

Great post Brian. A real pleasure to see your mind thinking through poems that pose problems without offering any easy answers, that sew obscure private seeds in the midst of ordinary--albeit incantatory--language fields.

Thanks, Indran. Read some more of Blaser's poems today. Incantatory is a good adjective to describe his aesthetic. A number of his poems -- particularly the Image-nation series -- are whirlwinds of notions and flotsam, but nevertheless but forceful tableaus that bring to mind the paintings of Jackson Pollack. At the same time, private seeds that don't sprout are inert, and if the quotient gets too high of those, I say to myself, why bother going through the effort to descipher?

Quite right. Some poets don't produce enough fruit to go around. Or the fruit cannot be seen for the riot of weeds. I don't have any Blaser at home but am planning to acquire some and hope to hear him here in the Fall. He is a bit frail I hear. Am curious and hope that I can meet him. Let me know if you got my email. cheers. Indran

Yes, he is frail, as can be expected at that age. But I'd still say he is quite deserving of the adjective "spry". And his poetry/life of the mind has kept him vital.

It's an interesting post, Brian. Thank you. I think many poets either purposively or subconsciously use similar images in different poems over a period of time. Something entrances about the image...

Pris... sometimes it's the same word. I've almost finished Pell Mell. I think Blaser uses the word "summer" at least five times. When does leitmotif become crutch? Summer, though, is general enough to be a kind of setting; one other reason I don't mind his use of it so much is that we're going through such a long and hard winter. In my own manuscript the other day I discovered the word "penumbra" used three times, and two of them in nearly adjacent poems. Somehow, the image is specific enough to seem like a crutch. I think I'll strike out at least one penumbra -- the one that seems least effective -- so the repetition doesn't annoy.

Another oft-repeated item in Blaser's lexicon: sweet, plus variations -- sweetness, and "sweeties" above. Occurs at least 4 times or 5 times. Perhaps he verges on saccharine, but it's to his credit that he doesn't completely fall into the honey pot.

I wonder Brian why the repetition should annoy especially if the same word appears in different poems. And then if it was repeated in the same poem, that very repetition may be what the poet wants. Although I think reviewing a manuscript for repetitions of certain words is useful for the poet to understand his linguistic obsessions I don't think it will bother the generous reader who just wants to have inteligible poems even if they are made up constantly of the same words. cheers. Indran

Repetition doesn't annoy me, either, Brian. If the work is well-written, it's not a problem. I have to say, I think you're the only poet I know who would repeat the word, penumbra, though:-) I hope teasing you a bit doesn't offend.

Beyond a penumbra of a doubt, Pris, Indran, you may be right. And it's true, there can be no fixed rules here. But annoyance may be a tripping alarm bell...either that the poet is unconsciously falling on old habits, using prefab "filler" where only break-through originality will do, or that I, as a reader/editor, am getting too darned fastidious.