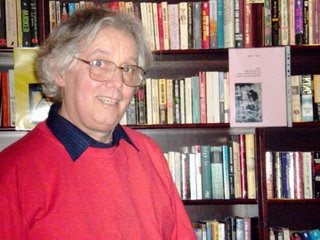 Allen Sutterfield at the launch of "Grendel's Pond" in Chengdu's The Bookworm.
-- courtesy of Della Marina

Was relieved to get this message the other day:

Thanks Brian, yep, I'm ok. I'll give you more details later but no real damage in Chengdu proper. Did you ever receive GRENDEL'S POND? aLLEN

And yes, Grendel's Pond, Allen's chapbook -- rubber-stamped April 11 -- arrived in the mail the same day. To my happy surprise, here was the dedication on the inside front cover:

Poet, Friend and Companion
on many dives
into the depths
of
Grendel's Pond

The writing itself? Well, I have yet to give the chapbook a proper whirl, but I can say this much: although he's been a wonderful editor and mentor/friend on my own writing journey, his writing has never been entirely my cup of tea -- although I'm sure I understand the subtleties of its "taste" better than ever.

Basically, with some lyrical exceptions in his oeuvre, he's a kind of "language poet", branching off from people like Olson, Kerouac, Patchen and Ginsburg, although quite disconnected from, and possibly unaware of, prominent later or "other" members -- Zukovsky, Bernstein, Andrews, Silliman, et al -- of that movement. He's written over 5,000 texts -- poems, fragments, prose poem- or journal-entry like things --which he has paired with visual images, and which are connected together into a grand organizational scheme -- as yet, not totally realized, and probably impossible to "complete" -- that he calls "The City of Words". A central notion is of an ethereal (although always actual, he'd argue) world created by words into which writer (paired with the reader) enters on an open-ended journey of discovery. Process is the thing, which enables, of course, a kind of endless "anything goes" on the part of the writer. Demands on the reader, though, as he negotiates through this multilateral web and tries to parse intended from accidental meanings, can require an elite level of literary awareness. Frequently Allen's work consists of a conscious meditation on the process itself in the midst of the process, a kind of writing about writing. Many of these are unsatisfactory to me -- emotionally meager, sensually devoid. However, pieces marked by formal completion, trenchant observation, that are particularly"alive" in their awareness, delicate, airy, even visionary -- and there are a number of those -- can elicit my appreciation, even admiration. Flipping through the book, I see a few of the texts we argued about in his basement apartment in Toronto's Beaches two decades ago. Four pieces, all told, from a series he called "Runes" -- first words (or final words) of other poems strung disjunctively together, which themselves suggest a kind of narrative or at least, an intriguing juxtapositional dynamic. My response at that time: what the hell? Too mechanical. Now, though, I quite enjoy them in their polysemous serendipity. Here's one of my favourites:

I see he also included this particularly astringent little text. To me it has resonance for all his work:

Poetry is more than lies on the surface.

Here, a poem. And here, a prose poem, one of his strongest texts. My dialogues with him have figured prominently in this blog...although what can be found here is the tip of a pretty large iceberg. To sample some of his critical insight, which can be acute, click on the label below.