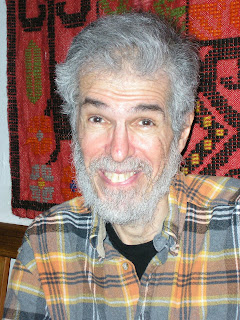 Steven Michael Berzensky (also known as Mick Burrs) I've written about before. Maybe he's the most under-rated poet in Canada. Perhaps this has to do with his (chiefly) free-verse conversational style, nearly indistinguishable -- on the surface at least -- from that of so many practitioners. One week two summers ago I read through his sixth full-length collection, The Names Leave the Stones, poems new and selected, and found it thoroughly engaging. (Funny it should take me so long to write about it...actually this post is from my drafts archives. Life & my swiss cheese memory just intervened.) Running a broad gamut from the personal, political, spiritual and everyday, I find that through it all -- even when dealing with painful, hard subjects -- Berzensky maintains a shining clarity and directness one associates with innocence. Behind that apparent simplicity though, a particularly sophisticated mastery is at work.

To give a taste of what I mean, here's a brief political poem:

NB, "bishops/and pawns" should sprawl a little more across the page, to suggest more far-reaching chess moves. "Skulls", too, should be out there a bit, first letter aligned with the last letter of the previous line -- again, to suggest a more far-reaching relationship. Unfortunately, the html just won't cooperate!
Posted by Brian Campbell at 1:27 am