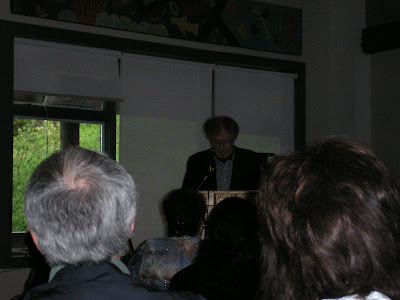 That's Don McKay -- or rather a distant silhouette of Don McKay, in probably the worst photo I will ever post on this blog -- giving the the Anne Szumigalski memorial lecture this year. A most engaging and erudite lecture it was. It took place at St. John's Fluvarium, a pavilion on a river where you could go down and see the river life through glass windows -- reeds bending with the current, fish spawning, etc. A suitable setting for his topic -- geopoetry, or poetry about geography (read nature, earth, non-human cosmos, universe.) Within those vast frames of reference he compared the Romantic poets with the likes of Chris Dewdney, and by implication, himself. Considering the way he framed the issue, it should come as no surprise that the Romantics should come away as, if "seductive", as he put it, rather naive and human-centred in their expressions of awe at the unknowability of nature, while Dewdney and others, with their familiarity with science, are wholly comfortable with a universe so enormous and utterly ancient it makes the entire human enterprise seem an infinitesimal speck. This makes Dewdney et al wiser, and more capable of respecting nature in and for itself.

My problem with that thesis is that both Dewdney and himself are comfortable academics who write out of equanimity. Their work, whatever its merits, is largely cerebral. None of the present-day geopoets I bet have been able to write anything with the passion, verve and lyricism of Rime of the Ancient Mariner, Tintern Abbey, Ozymandias, the Lucy Poems, The West Wind, Kubla Khan, Mont Blanc, let's see, what other flaming masterpieces? Seductive indeed. It strikes me, though, there's something crucial missing in a lot of their work.

But before I go much further out on a limb with my pronouncements, I should actually read more of McKay, Dewdney, as well as Tom Lilburn, Jan Zwicky, recent Roo Borson & Robert Bringhurst, to name those described as "ecopoets" on the Wikepedia site. That would, of course, keep my lips moving for quite a while. And my brain hurts to contemplate it, I'm afraid...

Update, June 8: Well, I have less to be afraid of than I thought. I've read about 30 pages of Camber, McKay's selected, and am quite enjoying it. Clearly my calling him "cerebral" was a classic case of the pot calling the kettle black. He does beautiful renditions of birds, and who ever heard of an untranscendent bird? (Unless it's a flightless bird, a chicken, turkey, ostrich or penguin...and penguins are awfully cute, their own kind of transcendence.) There's something to my criticisms above, but it will require a more nuanced critique. Consider the above a critique in progress (in other words: a half-baked critique!).

Last year I started reading Strike/Slip, and found my interest flagged: after reading through Camber, I think I'll give it another go.
Posted by Brian Campbell at 12:58 am

I find there's a rather large gap between McKay's rhetoric--and that of his critical champions--and what his poems actually do. And also that there's a much smaller gap between him and Wordsworth than he'd like to admit. I atsome length a couple years back. (See also Carmine Starnino's review of Strike/Slip.)

I find it interesting, with all the strawman-Romantic comparisons made by McKay and others, that the name of John Clare rarely, if ever, comes up. Clare out-McKays McKay so thoroughly--he actually does what McKay's critics say McKay does--that this lie of omission doesn't much surprise me.

Bringhurst and early Tim Lilburn are by far the best things to read from the ecopoetry school. A rarely acknowledged, but very interesting poet on the periphery of the ecopoetry group is Peter Sanger. Another is Harry Thurston. Recent Borson is awful. Recent Lilburn is worse. Zwicky has moments, but is mostly mediocre (and sometimes derivative of McKay, I find). Dewdney's unreadable.

Sorry for the multiple deletions and the botched comment above. I made a mess of the coding somehow and can't figure out how to fix it. The screwed up line in the first paragraph should read: "I elaborated these points at length a couple of years back."

I find there's a rather large gap between my post and your comments, hee hee.

As for McKay, I've quite enjoyed a number of his poems in Camber (now I've read about 40 pages), but I'm finding it very static, and my interest is flagging. Always the same theme & mood -- very much a poetry of quietude. "Recollected in tranquillity," indeed. While his work is informed by birdwatching, I don't think he can manage a fierce hawk poem like Ted Hughes or even Tennyson. So far all he's been able to show of the fiercer side of nature is some rather dull commentary called "But Nature Has Her Darker Side". Let alone, of course, the fiercer side of human nature.

I've read some early Bringhurst: I'm impressed by some of his Biblical dramatic monologues and bits from antiquity. I've never read Lilburn, Sanger or Thurston. Borson really excited me years ago with her first collection, "A Sad Devise", but I've been disappointed by what I've picked up since. (Not that I've paid that much attention since "The Whole Night, Coming Home"...zzz) And Dewdney, so far,aside from some interesting evocations of the ancient, has stuck me as absolutely obfuscatory.

Thanks, by the way, for these links to reviews by vous-meme and Carmine. I've read about half of each... but it's getting ridiculously late, so maybe I'll resume them tomorrow.