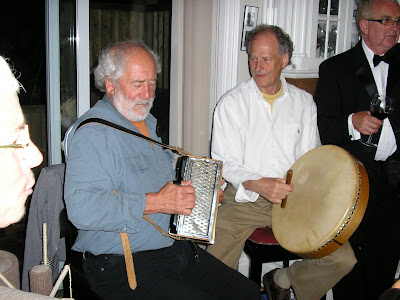 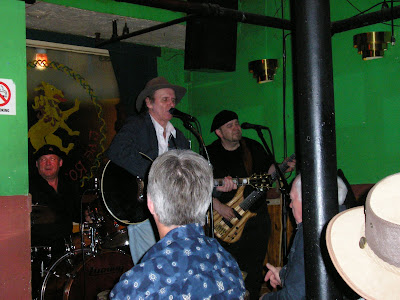 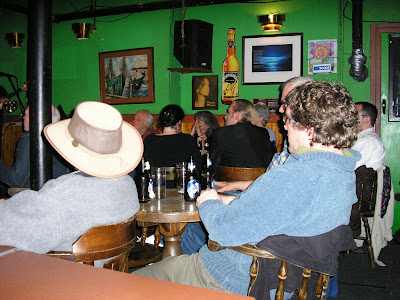 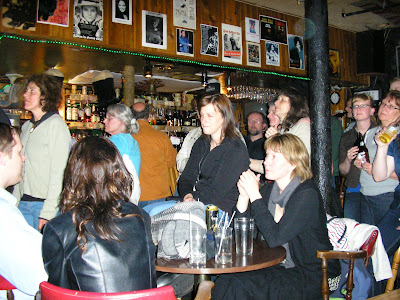 On Saturday evening of the 21st, after a day of meetings, Don McKay's lecture, Gala awards dinner and then even square dancing which some us us tried a hand (hand to hand?) at, all of us were invited to kitchen party at the home of the owners of The Pepper Mill, one of the better restaurants in town.* "Local musicians" provided entertainment -- actually the man to the left playing the accordion is (correct me if I'm wrong) Clyde Rose, founder of Breakwater Books, and the other man may be associated with them too. That was fun, but after a couple of hours there I went on the town to check out St. John's fabled folk music scene.

It wasn't hard to find -- a few blocks down at The Rose & Thistle, as luck would have it, I stumbled on a performance of Ron Hynes, one of Newfoundland's most significant singer-songwriters. What a treat! I didn't really know the man, but immediately recognized the quality through the window, and gladly forked over the $10 cover to take in the last set. He has quite a following on the Rock, apparently -- practically everybody there knows him. It was a fine show -- he mixed fingerstyle, solid rock rhythms, one piece a capella ("We're Dirt Poor!") that everyone sang along with: plenty of passion, humour, introspection. I took pictures of the crowd partly because the scene gave me such a gas. Here you can see all ages -- 18-80 -- crowded into this bar, hanging on every word that a 60ish-year-old man is singing.

How unlike Montreal, where everything's trendy, where the live music scene so often seems the exclusive preserve of teenieboppers & 20-somethings!

Here, to a much larger extent, the culture enjoys music and music-making for itself, rather than as part of some massive promotional record-selling hype.

I know what I'm saying reeks of simplification -- but regardless, this was water to a parched throat for me.

Stopping in at a couple of Irish bars with live music -- people of all ages dancing in the wee hours -- confirmed the impression.

Mind you, Montreal has a couple of good Irish bars too, down on Bishop's & Crescent St. I haven't set foot in them for years. Frankly, ye olde Irish music doesn't interest me that much: it's lively and fun, but highly generic.

P.S. Of the Ron Hynes sound samples on this site, the ones I like best are "My Name is Nobody" (the most touching song I've heard in a long time) and his classic, "Sonny's Dream".

*actually, I'm mistaken -- that was on the Friday the 20th, after a day of meetings & seminars.
Posted by Brian Campbell at 12:45 am