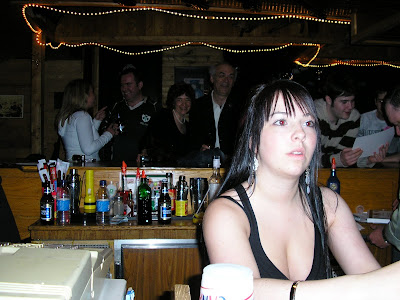 George Street -- the street of outdoor cafes and live music bars in St. John's -- is really hopping on Saturday nights, especially in the summer. At Trapper John's, one of the more prominent pubs, they serve Newfoundland Screech -- a strong Jamaican rum -- but to have it you have to go through their traditional "Screeching In". Here's the ritual: the bartender (seen above) puts the shots on the bar, which she orders the participants not to touch, at the pain of a wooden sword with which she'll mockingly strike any hand that ventures near a glass, until the screeching in has begun. Then everybody has to bellow these incomprehensible lines:

Indeed I is the old cock,
And long may your big jib draw!

When she's satisfied everyone has shouted these lines as loud and lustfully as they can, she rings a bell for a few seconds, during which you're to drink the shot "down the hatch". If you've stayed straight -- standing, that is -- you're supposed to kiss a wooden carving of a Puffin, the provincial bird, in the behind -- then she knights you with the sword and gives you a certificate pronouncing you "Honourary (sic) Member of Trapper John's and Newfoundland & Labrador." All rather silly and fun. And if this little rite, adapted primarily for tourists, did indeed evolve -- or devolve -- from some tradition, it may have been drinking bouts where the winner was the only one left standing.

The dancing, by the way, was as wild as I've ever seen. Several girls were celebrating a stagette -- one of them was getting married -- and they dragged men in (me included) to the dance floor to dance with them. They also had this inflatable doll with a huge erection which they were throwing around and with which they were doing all kinds of -- let's put it politely -- suggestive moves. All this to music provided by one lone singer-guitarist with a voice like a serrated knife and very strong strum -- he played a mix of traditional Newfoundland songs, Dave Matthews, Rolling Stones, etc.

The approximate meaning of the "Screeching In" slogan above, I'm told is,

Indeed I am a good guy
And clear sailing to you!

which strikes me still as rather a non sequitur. Of course this translation is bowdlerized of all kinds of phallic connotation. The big jib is the triangular foresail, the one that projects out front. Nellie Stowbridge, author of The Newfoundland Tongue, told me that her grandfather used to greet his old buddies with, "How're you doin', y' old cock?" Reminds me of "salty dog" in old blues songs. Anyway, I'm sure you can get the drift. The use of "I is" is a testament to Newfoundland vernacular, and now remains pretty much a vestige from the past. It also survives in the famous song that goes, "I's the b'ye that builds the boat, and I's the b'ye that sails her". 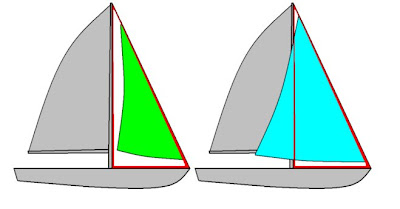 Email ThisBlogThis!Share to TwitterShare to FacebookShare to Pinterest
Labels: Newfoundland

Go to a bar in NewFL.