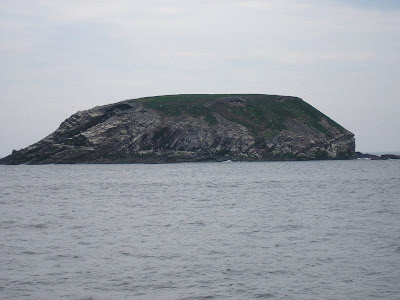 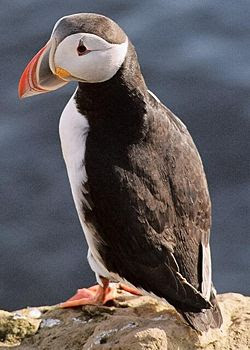 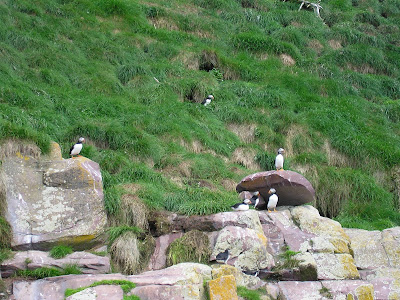 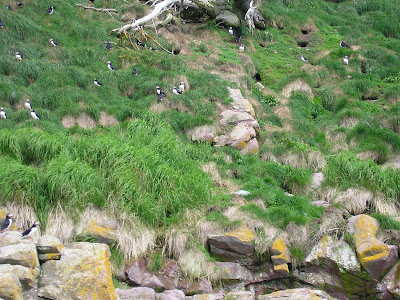 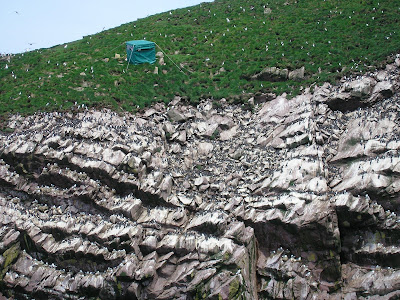 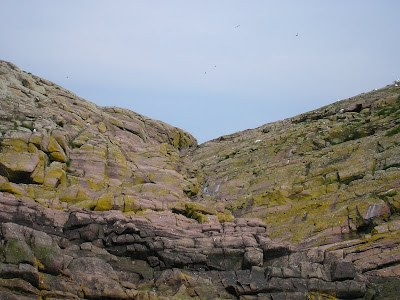 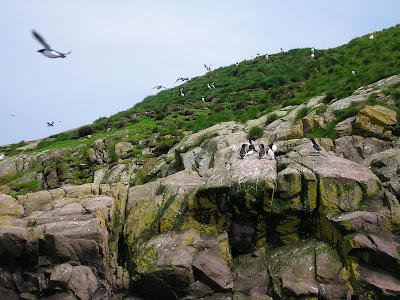 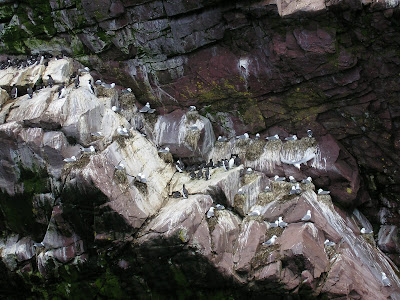 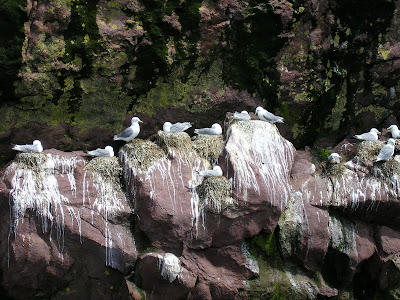 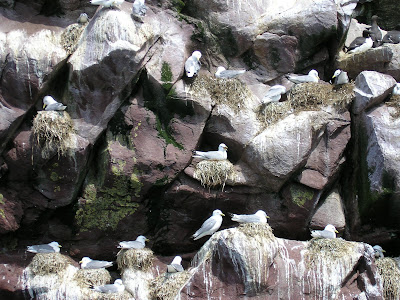 The Witless Bay Ecological Reserve is home for no less than 260,000 pairs of puffins, along with hundreds of thousands of other birds, including a cousin of the puffin, slenderer with a black beak; a certain species of seagull that only inhabits these islands, a number of eagle species, and tourists like me ;-) At top is one of the four islands that make up the Reserve; if you click on it, you can see the air above the island swarming with birds. (It is not Gull island, which we saw up close, but one of the others.) The steep, rugged cliffsides on these islands provide an infinitude of perches. Puffins (second picture down -- a stock shot) can't fly long distances -- the guide described them as having the aerodynamics of a potato with wings. They jump off the cliffs, and plummet as much as 70 meters deep, "fly" underwater and return with their beaks full of caplin, tiny sardine-like fish that still teem in these waters. Like penguins, puffins are monogamous for life. They burrow tunnels as long as three meters deep in the hillsides with their beaks, where they lay and protect the one egg they produce per season. Their beaks are bright and parrot-like only during the mating season. In winter, they molt the coloured covering, to regrow them the next summer. The high winds and waves of the North Atlantic make these islands uninhabitable in winter; a valley in the middle of Gull island (the brown V-shaped depression, 6th picture down) has been swept bare by waves that crash over the island, turning it at times effectively into two islands. The puffins, unlike the other birds, don't journey south in the winter; they fly and swim about a hundred kilometers out from their islands, and float about on the ocean. To appreciate these bird pictures, again, you really should click on them to see them large. The 5th picture down shows an observer's blind, used by the handful of naturalists that are the only humans allowed on these islands. Most of my puffin pictures, unfortunately, came out blurry, due to using the zoom on a so-so camera on a rocking boat; the best one I took is the third picture down. The puffins are relatively silent, but at times, the sounds of all the other birds can be almost deafening.
Posted by Brian Campbell at 12:37 am

Email ThisBlogThis!Share to TwitterShare to FacebookShare to Pinterest
Labels: Newfoundland

Oh WOW! I did look at them large and these birds are amazing! Good shots, Brian. I'd never heard of this particular bird, much less its sanctuary so thanks for this post. Such beauty!

To me the question is, seeing as thos puffins are practically identical, how can they tell each other apart? Esp. their lifelong monogamous mate?

These puffins look like your students. Cute, and all look the same, with an accent :)

I guess in the North every single creature is cute, little seals, polar bears, and lovely birds.

Invite them in your class, we can share experience ;)