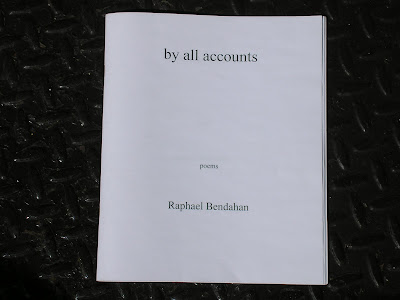 A maquette of the next Sky of Ink chapbook -- that is, sans cover graphics, which are yet to be worked on. Raphael and I edited the poems over the last two or three of years of get-togethers, which took place more or less monthly. When he came up to visit at the cottage last month we selected the best; then, in a series of snap decisions I arranged them -- spreading them out on the living room rug -- in the order they've pretty much stayed. The latter process took all of about 5 minutes. It was fun for me and breathtaking for him. Some of these poems were drafted as many as 30 years ago: he told me it was like seeing his life flashing before his eyes. Raphael nevertheless had the presence of mind to film me doing it. It would be interesting to post that video here, eventually. We're both very pleased with the poetry. I would include one here, but I believe he wants to send some to a few better reviews before they're published in this form. I think as they stand they are well worthy of that level of publication -- say in Poetry or Descant. The chap, though, will probably come out sometime this fall. 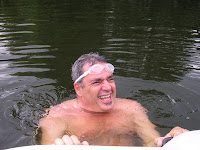 Posted by Brian Campbell at 1:20 am

Awesome! I love hand-made chapbooks. My most recent blog is actually a how-to for making them, because whatever they look, they are not as easy as they may seem to make. Good luck with finishing up. And finding cover art. That can be its own can of worms.