Some inside information of Creeley's "Sad Walk" 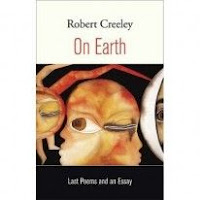 Some weeks ago, I posted Creeley's poem, "Sad Walk", from his posthumous collection, On Earth: Last Poems and an Essay; I also referred to it in my Rover review on that title. I just got a comment from the editor Sirena, a literary magazine, filling me in on what spurred that particular poem, which it pleases me to post here:

So that you know the context of this poem: when we were preparing a special issue of Sirena: Poetry, Art and Criticism, in honor of Bob Zieff (composer of many of the pieces played by Chet Baker), we sent Robert Creeley the music score of Zieff’s “Sad Walk”, along with a CD containing five variations of the same piece, and asked Robert to write a poem in reaction to what he heard; Creeley’s “Sad Walk” is what came out of it.

there are others afflicted with ur disease:

Fun poem, but I think it could be honed -- after sixteen lines or so, I get the idea, then it's yada yada with a few stats thrown in (that's about the only interesting part in the latter section)..

Very true, just thought the coincidence was funny. that whole flarf thing is a bit ridiculous. dunno if i can write about being lost in a search engine when most people dont have computers.

The power of having a blog, huh? :P How cool to get an email with extra info like that.

As for the flarf poem, it's just the Madonna song "I Touch Myself" with Google shoved in there. So I don't know that any paring down could be done without changing that.

Really, there's a lot more that can be said about what Flarf could do to read better than there is about what it does right. haha

Kieth: yes it was cool -- sometimes interesting comments like this happen years after posting. One reason I prefer Blogger to Twitter. As for the flarf poem -- it's that lame, huh? Thanks for filling me in. I was too clueless I guess to see Google being shoved into Madonna. As such, I still think the poet could have done a defter job of shoving it in there.

This was fascinating...to know the inspiration for a poem. Thanks!!