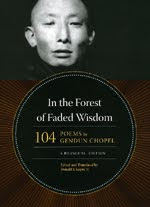 Below, some extracts from In the Forest of Faded Wisdom: 104 Poems by Gendun Chopel, edited and translated by Donald S. Lopez, Jr. Although the anthology is arranged thematically, there is a chronological element in the arranging too. These I take to be early poems. This is supplementary material for my review of that book in The Rover. I also added some notes that didn't make it into the review.

Compassionate power of the three jewels,
Reliable refuge that never deceives,
Calming all illusions of meaningless samsara
Bless our minds to turn to the dharma.

To the friend of gods and humans, with lotus eyes of nonattachment,
A body made of thousands of virtuous deeds, worthy of the world’s worship,
Endowed with the color of the purest gold,
To the one who abides in Sravasti, I bow down.

The mirage of a lake of clear water with patterns of waves
Is recognized to be a plain of dry sand.
Unwanted things that come to be true
Are but portions of the suffering gathered in samsara.

#26
What intelligent person would honor you as a friend for protection from the great enemy, fearful samsara?

Objects of knowledge posited by the mind as existent and nonexistent;
Valid forms of knowledge dependent on objects true and false.

I am uncomfortable about positing the validity of convention.


Worldly affairs, no matter what they are, never end.
At the end of doing deeds, there grows despair.
When all the pleasures and wealth proudly gained are gathered,
They make up but one-tenth this pile of pain.

Thanks.
Some extracts here: http://www.wisdom-books.com/ProductExtract.asp?PID=19454

Another poem by Chopel written circa 1948:
http://www.circumferencemag.com/Issues/issues.aspx?PoemID=7d&IssueNumber=7