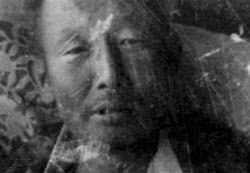 Below, extracts from other later poems of Chopel -- this time the "Precepts of Passion" section in In the Forest of Faded Wisdom: 104 Poems by Gendun Chopel, edited and translated by Donald S. Lopez, Jr. This is supplementary material for my review of that book in The Rover. I also added some notes that didn't make it into the review.

There has been considerable interest in Chopel in recent years -- other translations of his work have come out, and recently a film about him called The Angry Monk. The photo to the left is not one of Chopel, but, I take it, a frame from the film. (I took it from a German review.)

If coupling was abandoned in the realm of humans,
It would surely become empty in an instant.
And if there were no human beings
How could there be monks and the Buddha’s teachings?

First kiss the arms and under the arms
Then slowly kiss the belly.
Becoming more intoxicated, kiss the thighs and vulva;
Draw the streams of the channels under the sea.

98: “I bow down to the sphere of self-arisen bliss”

With little shame in myself and great faith in women
I am the kind who chooses the bad and discards the good.

…
The monk Mi pham wrote from reading.
The wanton Chopel wrote from experience.
The difference in the power of their blessings
A passionate man and woman will know through practice.

May all humble people who live on the broad earth
Be delivered from the pit of merciless laws
And be able to indulge, with freedom,
In common enjoyments, so useful and right.