From its first paragraph, all expectations of literary quality are tossed out the window:

Renowned curator Jacques Saunière staggered through the vaulted archway of the museum’s Grand Gallery. He lunged for the nearest painting he could see, a Caravaggio. Grabbing the guilded frame, the seventy-six-year-old man heaved the masterpiece toward himself until it tore from the wall and Saunière collapsed backward in a heap beneath the canvas.

Need it bear pointing out how awful this paragraph is? I expect most of my regular readers would see it right away, but… identifying the character as a “renowned curator” right off the bat, telling us his precise age (all these details could be worked in later, of course, suggested through action, dialogue or deft description), the awkwardness of the phrase “heaved the masterpiece toward himself”, the hackneyed vagueness of “collapsed backward in a heap”, the cliché of the guilded frame …

Welcome (or welcome back) to pulp fiction. The purple prose .

Needless to say, not my usual fare. It so happens a discerning friend passed this one on to me as a pre-birthday gift -- with a note, “Here’s a real brain teaser for you!”

So with all the hype and the movie which has just come out, I decided to give it a whirl.

And frankly, I enjoyed this one. Despite myself. Despite the novel’s narrative and stylistic clunkiness, despite the lack of any real characters, etc.

I think the book is so entirely refreshing because it's so bad and so ingenious at the same time. I couldn't think of a cleverer way to make 250 million dollars myself. Way to go, Dan Brown! We must give the man credit where credit is due…

On one level DVC is a typical murder mystery. That in itself is not particularly interesting: the same scenario, with seemingly infinite variations, gets played out on TV every night of the week. But what is interesting about this one is that it revolves around some pretty engaging themes: an age-old conspiracy to suppress “sacred feminine” by the Catholic Church, and in particular, Jesus’ possible marriage to and children by Mary Magdelene and plans that she 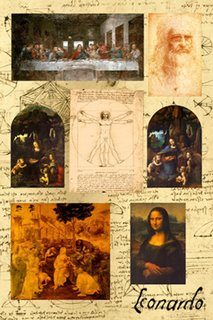 succeed him in leading the church. Along the way, we are introduced to some heady historical, mythological and intellectual material. Things I enjoyed learning (or re-learning) about: the mysterious and inspired quirks of Leonardo da Vinci, as well as his Mona Lisa, the Last Supper, and other masterpieces; the demonization of pagan symbols by the early Church; the existence of dozens of alternative gospels; practices of bodily mortification by some members of the Opus Dei; that strange misogynistic Renaissance text, Malleus Malificarum; the uses to which anagrams were put in the middle ages; the role of the Knights Templar; the symbolism on the tomb of Newton; the fibonnacci sequence; PHI (or Divine Proportion); the Rose Line in Chapelle Saint-Sulpice and the symbolic intricacies of Rosslyn Chapel; etymological origins of words like villain and crucifixion.

Part of the fun, of course, is that much of the information is true and yet much also false or unsubstantiated -- despite the author’s claims to factual authenticity. (I will not waste words getting into high dudgeon about Brown’s documentary irresponsibility in what is after all a work of fiction… Here, an elaborate site devoted to the factual merits and demerits of the DVC.) Indeed one of the best ways to enjoy this book is to read it beside your computer and look up the extravagant claims and references as they come up. The experience of reading DVC can then become culturally enriching indeed. Along the way I discovered some extraordinary sites, among them, this high resolution tour of the church in Milan that holds The Last Supper, and this site on Scotland’s Rosslyn Chapel. Just contemplating those cultural treasures is utter delight.
__________________________

A plot machine – that’s how Ron Silliman describes Dan Brown’s authorial presence in DVC, and for all the information the book contains, it is the blatant withholding of information that moves that plot along. I like what Silliman has to say about this:

For all the excess detail at the start of chapters, Brown’s favorite word in this novel is actually rather vague: something. As in “You and your brethren possess something that is not yours." Brown’s formal problem, chapter after chapter, is how to advance the narrative without giving away key details – in this sense, the book resembles nothing so much as the old Flash Gordon serials from the movies of the 1930s & ‘40s, with their brief episodes lurching from cliff hanger to cliff hanger. And, indeed, the Indiana Jones movies are a kind of homage to those same movies.

It would have been nice to be able to do a word search on the text to see how much the word something comes up, but flipping through the book I found these:

If it went as planned tonight in Paris, …. (he) would soon be in possession of something that would make him the most powerful man in Christendom.

Confused, he read it again, sensing that something had gone terribly wrong.

Something tells me you will eventually find what you seek.

Otherwise, Brown depends on an assortment of vaguenesses, indefinite articles and pronouns that are pretty much the equivalent of something. The most egregious of these:

That instant, (she) could finally see what they were all witnessing. As she staggered back in horror, she felt the image searing itself into her memory forever.

What that image is, we don’t learn until almost 200 pages later.

Get a load of these sentences. Most are final sentences of chapters or at least to be found in the chapters' final paragraphs, followed by scene changes in succeeding chapters (I've hidden the identities of characters so as not to run a spoiler risk):

X was about to escape … whether he/she wanted to or not.

X decided to stay there in the darkness and watch Y's every move.

First, I want you to tell me everything you know about X.

Now X had another problem. . . Where do I take them?

"Our work tonight is not yet done."

“You and I have much to discuss."

“You had better explain yourself. You have not been honest with me.”

X pulled the pistol from his pocket, and inched down the hallway.

When X read the label above the empty peg, he knew he was in trouble.

X dialed zero, knowing the next sixty seconds might answer a question that had been puzzling him all night.

X felt shaky as he inched deeper into the circular room. This had to be the place.

All part of the stock and trade of thriller writing. In most of my fiction reading, such authorial tricks are so muted as to be truly slight-of-hand. Reading Brown has at least momentarily heightened my sensitivity as to these devices, so that now I even find myself spotting them in a Nicole Brossard text. (Which I temporarily abandoned, by the way, to read this much more compelling page turner…)
__________________________

The book itself, as well as its sheer popularity (60 million copies sold so far), do constitute a weird warped reflection of the collective psyche of these information-stuffed, spiritually starved, mundane yet desperate times. Simplistic and dummied down though it may be, there is a passionate argument within the DVC that’s well worth heeding. Notions of alternative takes on traditional religion – especially those that privilege the individual and the primacy of women – are tantalizing and I would say entirely justifiable in this era. What DVC and other texts refer to as the Judeo-Christian suppression of the sacred feminine is, generally speaking, true, and the subordination and indeed demonization of life-affirming pagan elements of our culture, equally obvious. Although the early and neo-conservative church are portrayed as the heavies in this book (I’m not taking this book seriously – am I?), it seems a similar suppression has taken place in practically all of the world’s religions and cultures. If there’s any conspiracy, it seems pretty clear that it’s more unconscious than conscious -- more the product of collective forces than any particular individuals or institutions. Conspiracy theories though are wonderfully appealing to the human mind – especially to us bottom feeders who are kept in the dark as to so much of what goes on.

So if you haven’t read it yet, buy this book – or have one of its 60 million readers pass you a copy. You may not like it, but you'll enjoy it immensely. It’s a phenom. (There’s a plug for you... do I get a commission, Mr. Brown? Even .1% would set me up pretty nicely...)

Posted by Brian Campbell at 9:36 pm

Two thoughts on D.B. and DVC:

The very mistakes you point out about "renowned" the curator's age are what the discipline of screenplay writing can help eliminate. In writing a screenplay you have to learn that your audience can only know what they see. mind you, fiction does allow for an omniscient narrator on occasion - if the writer know's what they're doing. One of my favorite examples of that kind of narrator appears at the beginning of the film Amelie.

The second item is Dickens. He was and still is often criticized for writing improbable and flawed novels with preposterous coincidences and exaggerated dialogue and characters. And yet, for many readers Dickens is a genius whose overall vision transcends the perceived gaping holes in his aesthetic. Now, Brown is no Dickens, but he does pace his novels well and knows his genre.

Notice I don't disagree with anything you've said. I had a similar experience reading Angels & Demons.

No he's no Dickens, that's for sure.

Funny, I had a friend say after reading this post(he hadn't read the novel himself) that when a student can't write his way out of a paper bag and then comes up with unexpectedly brilliant stuff, usually what the teacher suspects is plagiarism. Well, Brown has survived that suspicion, hasn't he?

Thanks for the comments, Jocko.