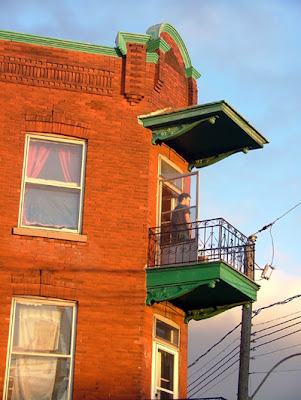 photo by Christopher DeWolf, from Welcome to the Mile End
Talking with a friend about last week's Waverly St. bash, he pointed out that a number of things peculiar to the geography and urban architecture of Montreal make these kinds of happenings possible where they simply aren't in other cities: we have a lot of well-defined, high-density, mixed-use neighbourhoods (by mixed use: lots of corner stores, restaurants, family owned businesses, and the like integrated with residential land use, i.e. within short walking distance) . In other places (the Mtl. suburbs, most of Toronto, and particularly wholly suburban cities like Houston or LA), you can go out on the street and take a long walk past 10,000 neighbours, but whatever would you do that for? Where would you walk to? Better to hop in your car and drive... hence neighbourhoods without sidewalks, etc. The car, it would seem, is the culprit more than any other so-called anti-socializing factor (i.e. TV, the internet, franchise and mass-marketing) behind the disappearance of community in North America. Just a side-note. And a pretty obvious one, come to think.
Posted by Brian Campbell at 2:58 pm