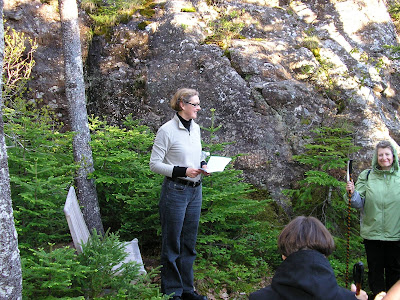 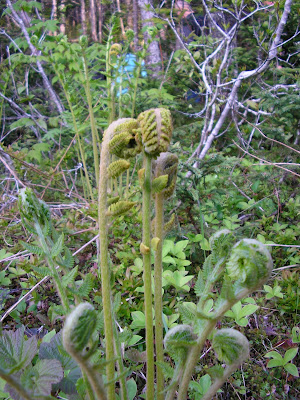 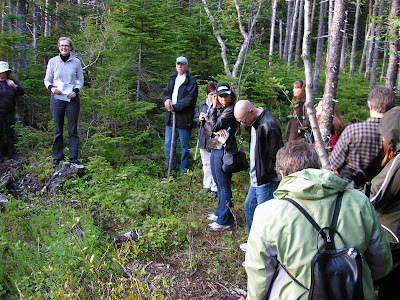 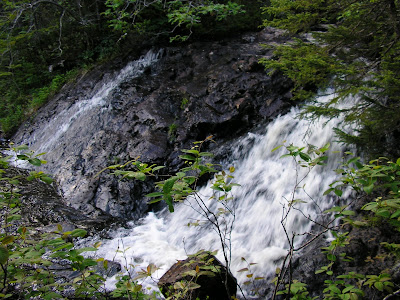 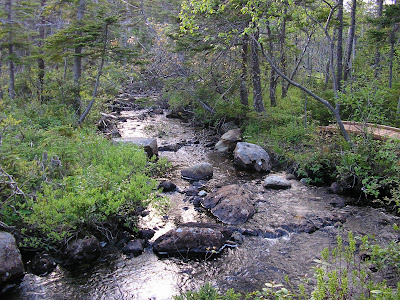 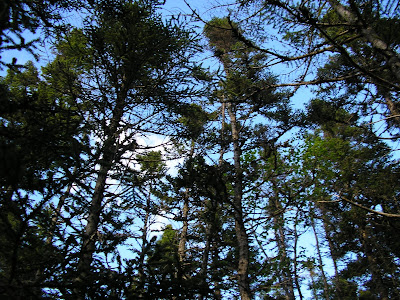 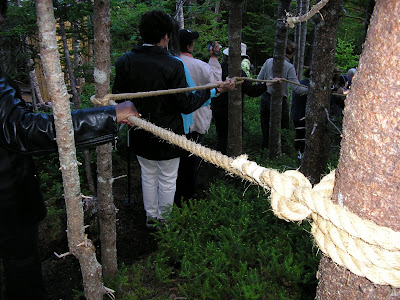 On Sunday evening, at the end of the LCP Conference/Fest, those of us who didn't have to immediately fly home took a bus out to Marlene Creates' property near Portugal Cove for an in situ poetry reading. Says the program:

The Boreal Poetry Garden is a project by Newfoundland artist Marlene Creates that uses words in situ. The texts commemorate certain fleeting moments in her interaction with the 6 acres of of boreal forest where she lives in "relational aesthetic" to the land. On Sunday, June 22, 2008 at 7 p.m., Marlene Creates will lead a walk along paths she has been making in the forest and pause at certain points to read site-specific poems.

One of the inspirations for the project is the rich Newfoundland vernacular. Its words reflect a very concrete correlatoin between this language and this landscape. Within these 6 acres there is a multitude of microhabitats: dark spruce and fir thickets; a steep wooded droke; a windblown tolt with goowiddy and tuckamore; a rattling brook called the Blast Hole Pond River; an overgrown bawn; and moss-covered volcanic rock up to 1,000 million years old. Each has a different dynamic, resulting in different details of observation and experience. Marlene Creates says, "I have become more and more aware that my experience of the landscape includes language. I cannot walk this terrain without the local names for landforms and vegetation sounding in my head."

Many of the poems were very haiku-like, and some I quite liked. I was reminded of certain Zen poets who rather than publish poems in a more permanent form, would simply tie their poems to a tree. (What a marvelous meditation that is on the ephemeralness of art and life!) Marlene said that for more than thirty years she had worked as a professional visual artist, much of that time spent marketing, packing and putting her art up for exhibitions. Although still quite active in the visual art world, she has grown quite skeptical of the marketing conventions around art; poetry publishing -- at least professional poetry publishing -- runs of course along similar lines. These particular pieces, she vowed, would never leave the property. Indeed, for her it would seem like sullying them to do so. For people to experience them, they would have to come out and hear them where they had been written. So far, dozens have -- ensuring a larger audience for these poems than a good many literary magazines would have provided! And in a partial reversal of her anti-marketing stance, a video called The Boreal Poetry Garden, featuring excerpts of her in situ reading, was aired on Bravo! TV last April. Nevertheless, the Poetry Garden Walk and Reading was an impressive experience of poetry for the inherent experience of the art itself -- a spiritual dimension we literary ladder-climbers can easily lose sight of. (As a joke I asked her if her forest accepts multiple submissions.)

PS. JULY 16: I just received this e-mail from Marlene about this post. It seems that I got some details wrong about her raison d'être for doing these poems in situ. Pay particular attention the third and fourth paragraphs of her letter. Did I mention that I listened to her talk on these walks and her video on about three hours sleep? Of course not. Anyway, I stand corrected, and appreciate the further insight she has provided into her creative process.

Thanks for letting me know about your blog, and thanks for your enthusiasm. The pictures look nice too.

In your commentary I think you understood quite well my approach. I especially like the comparison you made to the poets who attached their poems to trees. (And you probably didn't even know that I've been hand writing some of the short poems on card stock, installing them temporarily in the spot that the words refer to, and photographing them.)

There are a couple of things in your commentary, though, that aren't quite what I meant in my introduction to the walking reading. The word "marketing", for example, was not in my introduction at all. I did say I had been framing, crating and shipping my artwork to the outside world for 30 years, and that now I'm trying to work outside the institutions of the art world to some extent by inviting people to experience my work in situ. The institutions I was referring to, broadly speaking, would be public galleries and museums, which are the main kinds of places I have shown my work. I think I've always been somewhat "skeptical of the marketing conventions around art" (as in the commercial side of it), so that's not something new.

I haven't vowed that the poems "would never leave the property," though I plan not to read them out loud anywhere else. Not because it would "sully them" but because I feel the specific material details of this locale -- its tangible textures, its ambient sounds, its visible colours and shapes -- are important parts of experiencing the poems. As Liz Zetlin pointed out to me, there are things I haven't written that are part of the poems.

And there's another reason for the in situ experience. For many years, much of my work has been an exploration of the different layers of history and changing meanings in specific places. So when I stand in a certain spot and read a poem out loud, the words refer to an ephemeral event that happened right there. And the audience itself becomes another layer in the history of what occurred in that spot.

The film on Bravo! TV was a documentary that included me reading some of the poems in situ. The title of the film is "The Tolt, the Droke, and the Blast Hole Pond River with Marlene Creates." It's part of the series "Landscape as Muse" by 291 Film Company.

Thanks for the attention you paid to my project, and good luck with all of yours,
Marlene
www.marlenecreates.ca

NB, Dennis Reid has put Marlene's introduction to the Boreal Poetry Garden on his website as his "Quote of the Month". Float your curser over his "Home" link; it's there on the drop-down menu. Dennis' website has lots of interesting stuff, by the way; worth exploring.
Posted by Brian Campbell at 1:16 am