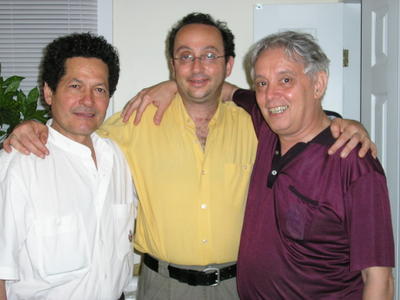 Francisco Santos, myself, and Allen Sutterfield
on the evening we wrote "Canto"

It was a suffocatingly muggy evening, June 14 of this year. Both Allen and I were in Toronto, and had arranged to get together with Francisco at a friend's place, where Allen, who resides now in Guelph, Ont., was staying. Since wine seemed a necessity (isn't it always where poetry takes place?), we made a long treck in the stifling heat along Danforth Ave. to the nearest LCBO to pick up a two litre bottle of cheap Italian red, and almost lost our evening in a pizza joint waiting for an excruciatingly slow with-the-works to go... as we waited, though, we did read and discuss a couple of poems from Anna Akhmatova' Selected, which I had picked up at a used bookstore along the way. By the time we got back to our friend's place, it was already closing on 9 pm. As Francisco and I were living/staying halfway across town, it seemed the evening was up almost before it began. (We had planned this get-together weeks in advance.) Over drooly pizza and sweaty juice glasses of wine (our friend's wine glasses were stored we couldn't find where), we laughed ironically at the inconvenience of throwing a party -- or doing anything worthwhile, it seemed, on the spur of the moment in Toronto. Suddenly something in our conversation -- I think we were talking about Creeley, who had recently died, and I remember now I even read out "I Know a Man" earlier that evening -- reminded Francisco of a verse he had written more than two decades ago, which he remembered as this:

which I immediately translated as this,

Take this silence
of a
bird

that you may know
the flight
of my
song
Francisco wondered if I had included it in the bilingual selected which I was in the process of bringing together at the time. He had always had an affection for this verse because it brought together silence/bird/flight/song and notions of taking/knowing/possession in one brief utterance... great concentration of language was evidently a poetic ideal of his, too.

Allen, trickster that he is, suggested this possible alternative (he doesn't know Spanish), which he intoned in a deep south accent:

Then Francisco came up with another variation, and somehow or other, we were off: a game was created: to see how many variations on that verse we could come up with using those exact same words. These we jotted down in Francisco's notebook, which we passed around round-robin style. Each time we came up with a wilder and more improbable variation, we doubled over in gales of laughter. At one point -- after about fifteen variations, when it seemed there were no possibilities left, the notebook was passed to Francisco. After a moment of mulling, he came out with this:

canto
"Hey, Francisco," we objected, "you didn't use all the words!"

"But this is an exception!" he said back with a raised finger. Gales of laughter again.

Henceforth exceptions, if exceptional, were allowed. I came up with a variation on his variation, and then we came up with six more conforming -- more or less -- to the original constraints. At this point, our friend came back. We all knew we had done something pretty significant artistically.... we were elated, minds on fire. A title sprang forth -- Canto -- and a dream of little chapbook and reading somewhere, at the Art Bar Poetry Series or Guelph's Woolwich Arms. In any case, it turned out to be one of the most enjoyable evenings of pure creative fun any of us had had in a long time. At our request, our friend -- Tony Marques, I'll let his name be known, another dedicated word craftsman who remains in an unpublished nether world -- turned on his computer and I transcribed what we had written into a wordpad file, and emailed it to all of us.

Tony took the picture above with my camera to commemorate the occasion.

The next week, looking through one of Francisco's earlier collections to find the poem and include it in the selected, I discovered that he had misremembered it: that he had written comprendas (comprehend, understand) el vuelo de mi canto, not conozcas (know). I called him up to see which version he preferred for the bilingual edition. He said, ah yes, but I much prefer comprendas. Subtler, he said. But know sounded better rhythmically in English, so I stuck with my translation of that evening -- but tacked the original Spanish version on as the concluding variation in Canto. After 23 variations, I suppose the singer would understand the song...

Anyway, Canto I later submitted to Dusie -- it struck me as down their particular alley -- and it was taken. You can read it here.
Posted by Brian Campbell at 10:26 am

Sound like a very enjoyable evening that produced great results. “Canto” reminds of jazz improvisation, each player riffing off the main theme and each other to create something wholly new, fluid and different every night.

There's nothing more fun than bouncing off poetry with kindred souls. Thanks for the account and the photo!